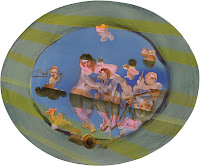 At first glance, Fragonard seems an unusual inspiration for a contemporary artist, but Keer Tanchak derives the imagery for her paintings, which are exquisitely executed on thin sheets of aluminum, from 18th century Rococo sources; namely the French painters, Watteau, Fragonard, Boucher and Lancret.
Keer Tanchak notes, “Watteau used most of his figures as 'stock footage'~ a limited cast of characters appears continuously in his body of work, their slightly shifted poses and contexts made to seem endlessly unique. I continue to explore these pre-cinematic techniques and introduce a similar cast of characters into dramatically altered environments. Ultimately I have found a surrogate for my own life experiences. The 18th century fascination for decadence and romance, and the political implications of these obsessions, remains a relevant, ongoing cultural
narrative.

The smooth surface, neutral grey color and industrial aspect of the aluminum are very appealing to me; and my process of applying oil paint to such a surface has been predetermined by these qualities. Reflection, absorption and luminosity are all elements I use to enhance specific imagery.”
For Fresh Picks, Keer Tanchak has given us exclusive use of a painting titled “Clutch”. The figures are from Fragonard, overlayed with a colour stripe from a coveted Miu Miu clutch design. The pun of ‘clutch’ refers not only to the design of a designer handbag which the artist was particularly drawn to, but also to the original Fragonard image where the male figure is clutching the female figure.
Born in North Vancouver, BC, Keer Tanchak completed her undergraduate studies at Concordia in Montreal, QC and her MFA from the School of the Art Institute of Chicago. She currently lives and works in Chicago, IL.
Keer Tanchak’s work is widely exhibited and collected throughout North America. Works can be viewed this month in an exhibition called “Pleasure Paintings” at the Elmhurst Art Museum, Elmhurst, IL and at the Dean Project in New York in RoCoCoPoP which “explores ideas of lavishness, excess, desire and frivolity that characterized the Rococo movement in the 18th Century by examining how contemporary culture has adopted these qualities by means of consumerism, mass reproduction and celebrity-mass media.”
The artist is featured in Jean Pierre Cuzin and Dimitri Salmon's 2007 book on the sources and posterity of Fragonard in 'Fragonard, regards croisés' published by Edition Mengès.
"Clutch" by Keer Tanchank is available only from the Vantage Art Projects as a Fresh Picks limited edition.
More information on Keer Tanchak is available at www.keertanchak.com and original work may be found at Sandra Goldie Gallery, http://www.galeriegoldie.com/, Elissa Cristall Gallery, http://www.cristallgallery.com/ and Dean Project, http://www.cristallgallery.com/
Fresh Picks is Vantage Art Projects' series of affordable limited edition fine art prints. The series allows art lovers to own work that is current and representative of the contemporary artscape. It is an unprecedented way for artists to share their work with collectors and art lovers across the world. Released twice a month, the artist and work is first announced to our mailing list and is sold exclusively through the Vantage Art Projects website.
CLICK TO BUY "CLUTCH" NOW STARTING AT $45+!