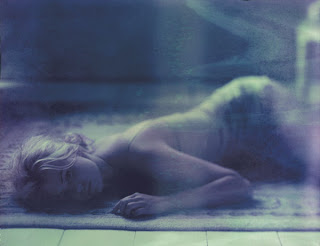 Vantage Art Projects is completely romanced by our new Fresh Pick limited edition. The image has the nostalgic and melancholy aura of a Marilyn Monroe or a Brigit Bardot film still from classic cinema. Almost voyeuristic, for us at Vantage, "Reminisence" is an iconic image of modern beauty.
The method by which Fred created this image is timely and poignant. It is the end of an era in film photography. Polaroid has stopped producing it's instant film, and although Fuji will continue making a type of instant film, it was Polaroid that was synonymous with the medium. More to the point, each type of film stock has always had it's own distinct quality, and it's own champions for that very reason. "Pola, au revoir mon vielle ami".
Fred discovered an old stash of 3"x4" film in his supply cabinet, long out-dated, most unusable. Massaging a few of the packets back to life, approximately a dozen frames were salvaged. An impromptu photo shoot with a willing studio assistant as a model allowed Fred to achieve the goal of simply making an image, instead of capturing a moment. The shoot was entirely for Fred's own enjoyment as a "shooter" and to go back to using the outdated film on a large format camera simply for the pleasure of photography. Fred says "it's difficult to say what the picture is about and I think the picture is it's own best description. When I shoot for pleasure - my pleasure - I shoot what I feel, or what I see. Sometimes the photo is narrative, sometimes it's interpretive or just a selective rendering that draws attention to some color or shape. Often my photos are little visual jokes or puns and usually I am the only person that gets the joke; and that's ok."
Fred Fraser is a Vancouver-based photographer with a successful commercial career. Fred got his education in photography as a result of being a failed piano player. Essentially self-taught, the artists that inspire Fred are more often writers and musicians then other photographers due to how he connects best to the passions of other people. More of Fred's work can be seen at: www.fredfraser.com.

FRESH PICKS! OWN THE FRESHEST THING IN CONTEMPORARY ART TODAY.
Posted by Jennifer Mawby at 10:39 AM