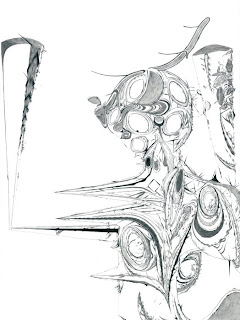 The wild bird, endemic to Macaronesia, is gregarious and builds cup-shaped nests while often fiercely defending it's territory. It feasts in flocks while foraging on the ground, and cannot survive without gravity. James Whitman's "Canary" is a wild bird of a different feather.
"Canary" comes from the figures and creatures in the artists "Some Kings" series. Whitman tells us the 'kings' are caricatured alien or ‘other’ subjects generated from a formal play with the construction of face, countenance, and the kinds of social space these can generate. They are purposely deadpan and low affect. They acknowledge us and present themselves, but they don’t elicit our attention or social engagement, and beyond holding our eye, they make no social display. As with wild animals, we don’t share their society and they are indifferent to us.
The kings’ social world, social relations, the state of the land they inhabit and its economics have been bracketed off, left open. We are not presented with the depiction of an imaginary or allegorical society and its functions and relations, but with difference, with our world become different. The point isn’t so much the specifics of that difference, but to depict the absence of our society, the world without our administration. These drawings both depict a certain semi-developed state of the not-wilderness of British Columbia, and shift this familiar mundane land of overgrown logging roads, abandoned fridges, and ten year old spruce over into a fantasy of an unpeopled world. They imagine a world that exists quite sufficiently without any of the very particular forms of meaning peculiar to our species. A world without our presence as witnesses.
James Whitman has an honours BFA from UVic 1998 and is currently represented by the LES Gallery in Vancouver. He is artist, curator, collaborator and has sat on board of the Vancouver Access Artist Run Centre and the ‘536’ curatorial society “with a focus on exhibitions in unusual situations”. He has completed residencies in Leipzig Germany and Dawson City, Yukon. He is a member of the Vancouver-based drawing collective Lions Pile. You can find more work by the artist at LES Gallery, Outbuildings and Livestock and Lions Pile.