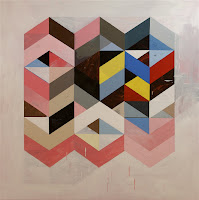 This month we have been happily driven back to abstraction with "Reconstructed Grid Painting No. 1" by Jeff Depner. This artwork is part of an ongoing discourse exploring compositional structure through the relationships between colours.

Concepts of math, science and colour relationship in art have been quite literally defined in the cubist works of Picasso or Braque, and etherically in the neoplasticism of Piet Mondrian and more currently in the mind-bending op art works of Bridget Riley. In an attempt to create something unique, artists cannot help but be influenced by previous art forms and the conversation of contemporary art cannot help but draw on past discussions. Historians like John Gage and Martin Kemp have added thorough text to the visual discussion, yet it never ceases to delight the eye when contemporary artists delve into the chat. Depner’s work suggests a digital cubism although entirely hand done with the energy of his brushwork evident in his original paintings. His obsession with the grid and colour balance or imbalance to flesh out meaning resonates with time and place. And while the grid is not new in art, Depner’s reconstructions pay homage to the ongoing discourse.

Using the grid as a framework, Depner's 'reconfigurations' use color, form and surface to address the visual, physical and psychological. The color harmonies are intuitive and are used in conjunction with pattern, rhythm and variation to invoke a sensory experience which hovers somewhere between language and the senses. Each color and form is linked inextricably to the next forming clusters of color chords. These chromatic relationships are used rhythmically to allow colors to travel across the picture plane vertically, horizontally and diagonally. As a whole, these units combine to create a sort of 'abstract sign,' operating separately from speech and writing patterns with the intention of seizing the viewer on an unconscious or automatic level.

Jeff Depner graduated from the Illustration and Design program at Capilano College in 1998 and is currently represented by the Jeffrey Boone Gallery in Vancouver BC Canada. For information on original paintings, please see www.jeffreyboonegallery.com.

This artwork is part of a series of studies that Margaux made in oil paint on small prepared birch panels. The paintings in the series were all conceived at a cottage in Pigeon Lake, Ontario, in the fall of 2008. She was there with her friend, the writer Sheila Heti, whom she has worked along side of and collaborated with on various projects since 2006. During this trip, they were working separately but talking a great deal about paintings and books. The paintings in this series all reflect that specific time and were used as open and intuitive explorations to help Williamson think about a future project.

Margaux Williamson was born in Pittsburgh and has lived in Toronto since 2000. She has been recognized as one of Canada’s leading young painters by curators and critics including The Toronto Star which called her “one of the best painters of her generation.” Most recently, she exhibited a group of studies at LES Gallery in Vancouver. Her last solo show, Trophy Ghost, was exhibited at Fette’s Gallery in Los Angeles in 2008, and in 2007 she premiered The Girls show Dostoyevsky the new darkness at the Marvelli Gallery in New York. In 2008, she was highlighted in Canadian Art Magazine as a young artist to watch. In Fall 2008, her experimental art project and movie, Teenager Hamlet, premiered at the Toronto International Film Festival in their art section, Future Projections. The National Post helpfully wrote of the project, “Since the words ‘experimental feature’ can strike fear into most art viewers’ hearts, the watchability of this was indeed a pleasant surprise.” In early 2009, a video she compiled from videos of teenagers dancing in their basements, which she subsequently posted on YouTube, was called by the New York Times Magazine, “One of the best things to have seen on a screen in 2008.” She has worked with many other artists, including, most recently with the writer, Sheila Heti, on a story they worked on together for a McSweeny’s publication about a fictional town of Waterloo, based in reality, set in the future.

For more information on Margaux go to www.margauxwilliamson.com or www.lesgallery.ca.

Click here to buy "Painting" by Margaux Williamson starting at $45+!

Posted by Jennifer Mawby at 4:17 PM