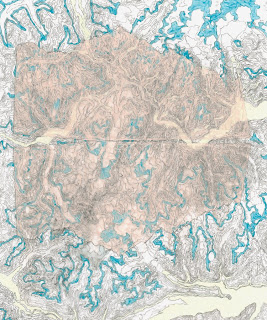 "Climb every mountain, ford every stream. Follow every rainbow, 'til you find your dream."

David Pirrie has us deep in wanderlust this month with "Height of Land", his topography and outward-bound inspired drawing done just for Vantage Art projects.

David describes the artwork as "a bit of an experiment for me. I wanted to get in between the contours of our land. I’ve taken a section of the Waddington Range in BC and drawn it on mylar. Randomly selecting a contour line, I followed it with paint brush in hand. Having been in the area, I could actually visualize where my brush was taking me, leading me to some rather interesting ideas on mapping and the many metaphors one can associate with it."
A a result, this artwork encourages us layer by layer to strip away the contours, mapping out a wayward journey that ultimately leads to repose.
David Pirrie lives and works in Vancouver, BC and received a Bachelor of Fine Arts from Concordia University in 1991. Since 2001 he has exhibited in Turin Italy, New York, Seattle, Bologna Italy, Toronto, and in British Columbia at the Surrey Art Gallery, Simon Fraser University Gallery, the Kelowna Art Gallery and State Gallery. His most recent solo exhibition was Codified Topographies at the Douglas Udell Gallery in Vancouver.
One of the constant variables in David’s work over the years has been a close analysis and detailed study of his subject, be it mountain topography, the human body, or car crashes. David has also been an avid mountaineer for 20 years, and has climbed many of the mountains in his paintings. His new works continue an almost scientific inquiry of mountain topography in Western Canada. Like a form of cataloguing, the paintings and drawings are a type of meditation on nature, geography, technology, and mapping. Quoting from David, “codification plays to the core of seeking knowledge, ascribing meaning, value and ranking. These ideas also play to the core of my being an artist, however, where I depart from the science of objectivity is trying to relay the emotional and physical situations where our need for accurate definition is way beyond our grasp”.

CLICK HERE TO PURCHASE "HEIGHT OF LAND" BY DAVID PIRRIE STARTING AT $45.00
Posted by Jennifer Mawby at 9:10 PM