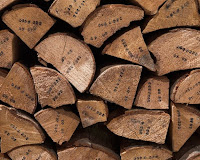 "Double, double toil and trouble,
Fire burn, and cauldron bubble".
Providing Shakespeare's witches with fuel for the fire must have been demanding work, and the wood-stoked pot over which they said their ritual incantation holds water for our new FRESH PICKS EDITION.
"Before/After" by Sascha Yamashita reminds us that an artist's work is thankfully never done. This stunning photograph from his "Before/After" Wood Pile installation references the following ancient Zen Buddhist proverb: “Before enlightenment - chop wood carry water. After enlightenment - chop wood, carry water.”

Through considering daily tasks and rituals in an artful manner, Sascha reminds us of the work ethic and repetitive hands-on-labour traditionally a very noble part of an artist's working life. This ritualizing of artmaking has a long tradition, including such conceptual trail blazers as Bruce Nauman and Mierle Laderman Ukeles. Nauman said of this own understanding of art work and repetition that if “I was an artist and I was in the studio, then whatever I was doing must be art” - suggesting his belief in the power of art to ritualize labour and mark it as important. In her 1970's "Maintenance Art Performances", Ukeles also turned repetitive “house work” into “art work” through performing domestic labour in a fine art context such as on the steps of a museum.

Wood Pile specifically considers repetitious and ritualized art practices through the allegory embedded in the work to question the “interwoven relationships of viewer/art object and process/result”. Finally, with "Wood Pile", there is the further suggestion that art practice approached in this fashion can lead to enlightenment, and that after enlightenment, there is still much more artwork to be made.

Sasha is a young conceptual artist who’s work draws from literature, art history, religion, philosophy, pop, Japanese and Canadian culture. Canadian-born to one Japanese and one Canadian parent, the conflation of culture plays a natural role in Sascha’s work. A year 2000 visual arts graduate of Emily Carr University of Art and Design, Sascha has shown his work in galleries across British Columbia and Washington State including: the Museum of Northern BC, Helen Pitt Gallery, Kamloops Art Gallery, Viking Union Gallery and the Back Gallery Project. In 2008 Sasha co-founded Vancouver’s Gallery Atsui and is currently an acting director. For more information go to: http://www.galleryatsui.com/.