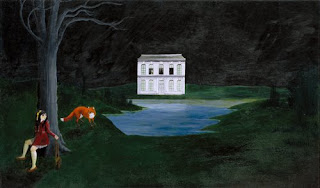 In "Mysterious Escapades" a girl hides in the shadow of a tree beside a moonlit lake. A fox treads nearby while across the lake a figure looks out of the second story window of a pristine white building. The feral fox and the imposing architecture seem to accompany the spirit of adventure and childish anarchy.

"Mysterious Escapades" is part of a series of paintings from Rebecca Chaperon’s 2009 called "Catholic School Girls Rule". These works attempt to evoke a sense of the collective consciousness. Some of the work in this series touches upon the group mentality gained by donning a uniform and assembling with others of one’s age and stature. Conversely, other paintings in this series, such as "Mysterious Escapades", emit moments of heightened, self-aware solitude and independent agency.

Drawing from the misadventures of various heroines of Victorian literature, Rebecca Chaperon’s paintings often portray a female protagonist within a surreal landscape. Her work aspires to entertain the mind with possible narratives, while suggesting a separate haunting emotive undercurrent.

Born in England in 1978, Rebecca settled in Toronto, Ontario at age 8. She attended Emily Carr University where she studied fine arts until graduation in 2002. She has exhibited her work across Canada and has been featured in several Canadian publications. She currently lives in Vancouver, British Columbia. For more information on the artist and original work, see www.thechaperon.ca.
Posted by Jennifer Mawby at 8:37 PM