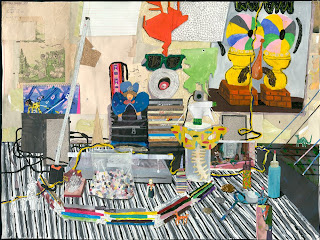 With summer barbeque season in full swing, Michael Swaney's collage and gouache on paper artwork "Best of the Wurst" whets our appetite.
The artwork is a first for the artist in the way in which he created his reference material. Michael built a desk-top installation in his studio, photographed it and then used the photo as the reference material for the resulting collage. This process is a new movement in Michael's work, one where he is investigating the idea of documenting an ongoing performance through illustrating residual elements of the stage set or backdrop upon which a performance may have just taken place.
Michael Swaney was born in Kimberly, BC and has studied both fine arts and graphic design. He was a founding member of the Vancouver Art Collective "Human Five" (2001-2008) and now lives and works in Barcelona, Spain. He has recently published a book with Stickit called "The Performances". Other book projects include "Artifacts of Finland" with Le Dilly and an upcoming project with Picnic Editorial. He has an upcoming solo show in September in Barcelona with Iguapop Gallery.
Although now based in Europe, Michael has kept up his North American connections. Last year he attended the Fountainhead Residency in Miami during which he prepared and installation shown at Miami's Locust Projects during the December art fair mayhem. Additionally, Michael is working with Katharine Mulherin in Toronto and has upcoming projects with Trepanier Baer Gallery in Calgary.