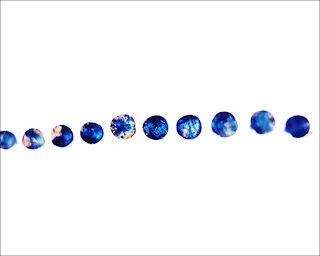 Nail Gun by Mark Mushet is from a series attempting to wrest some beauty from a typical worksite at one of the area’s many beige condo developments. Rather than focusing on the endless opportunities for “abject landscape” images the artist went for the macro view of the tops of a coiled string of partly oxidized, blued nail-tops. Intrigued by the idea of a casual spray of nails holding together countless square miles of beige stuccoed wall, Mushet likes to imagine the area’s future when only the nails are left on the concrete footing. This image is old-school film photography treated with cross-processing film developing techniques.
Born in North Vancouver in 1963, Mark Mushet has created images in many forms since 1985. He first trained in film and video, producing arts documentaries and shorts for television. In the late '80s he began work in still photography (self-taught) merging macro photography with contemporary music for a series of live slide-projection performances at galleries such as the Western Front and Helen Pitt.
By 1995, Mushet had established a career in editorial and design photography. He has contributed award-winning portraits of cultural, entertainment, business and sports figures to a variety of Canadian publications including Elm Street, The Globe & Mail, The Georgia Straight, Western Living, Vancouver, BC Business and Vancouver Review. He has also contributed to the British new music magazine WIRE and the US publication Fretboard Journal.
He was nominated for a Juno award for photography in the “Best Album Design: Photography” category in 2003 and has received 12 nominations and one win for “Best Photograph” at the Western Magazine Awards and nominations for “Best Portrait” at the National Magazine awards. He continues to produce images for contemporary-music packaging providing CD cover art for pianist/composers Wayne Horvitz and Robin Holcomb, composers Paul Dolden, Dennis Smalley, John Young, Bradshaw Pack, Sergio Barroso, Stephane Roy , Darren Copeland, David Berezan, Forrest Fang and many others.
He is currently co-publisher and Creative Director of Vancouver Review magazine www.vancouverreview.com and is curating its Centrefold visual arts section. His latest photography commission is a set of large format B&W portraits for the Museum of Vancouver’s Velo-City exhibit.
Posted by Jennifer Mawby at 12:35 PM