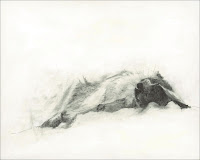 "It's Third Fall" by Carrie Walker is the third edition in FRESH PICKS Volume 1. This skilled monochrome image is reminiscent of old masters drawings and etchings, and was rendered in graphite and oil painting medium on board. The artwork is exclusive to FRESH PICKS, as the original is from the artist's private collection and is one that she intends to never part with. This artwork has also never before been exhibited or published.

"It's Third Fall" remains true to Carrie's oeuvre, where her fauna-based subject matter and the corresponding titles have an ambiguous, humorous and often tender quality. Carrie's choice of subject matter is generally small domestic or field animals, with the occasional predator thrown in for dramatic effect.

She has been described by art writer Lee Henderson as "an unorthodox taxonomist, whose focus has been metaphor, the subjectivities of language, and the emotional pitch in our depiction of animals in art". This artwork is a portrait of a cottontail rabbit lying on it's side. The ambiguity lies both in the interpretation of the state of the animal – sleeping or expired - and in the visual interpretation of some of the drawn passages. Certain parts of the artwork are abstracted such that the haunches of the rabbit can also be viewed as a windswept and craggy landscape.

Carrie Walker graduated with a BFA in Visual Arts from Emily Carr Institute in 2002. Since then, her drawings and paintings have been exhibited in galleries in New York, Los Angeles, Vancouver and London. She currently lives and works in Vancouver. For information on Carrie Walker, please visit www.carriewalker.ca. The artist is represented by the Kristi Engle Gallery in Los Angeles. www.kristienglegallery.com. Get Carrie's Fresh Pick Today at www.vantageartprojects.com !
Posted by Jennifer Mawby at 9:00 AM